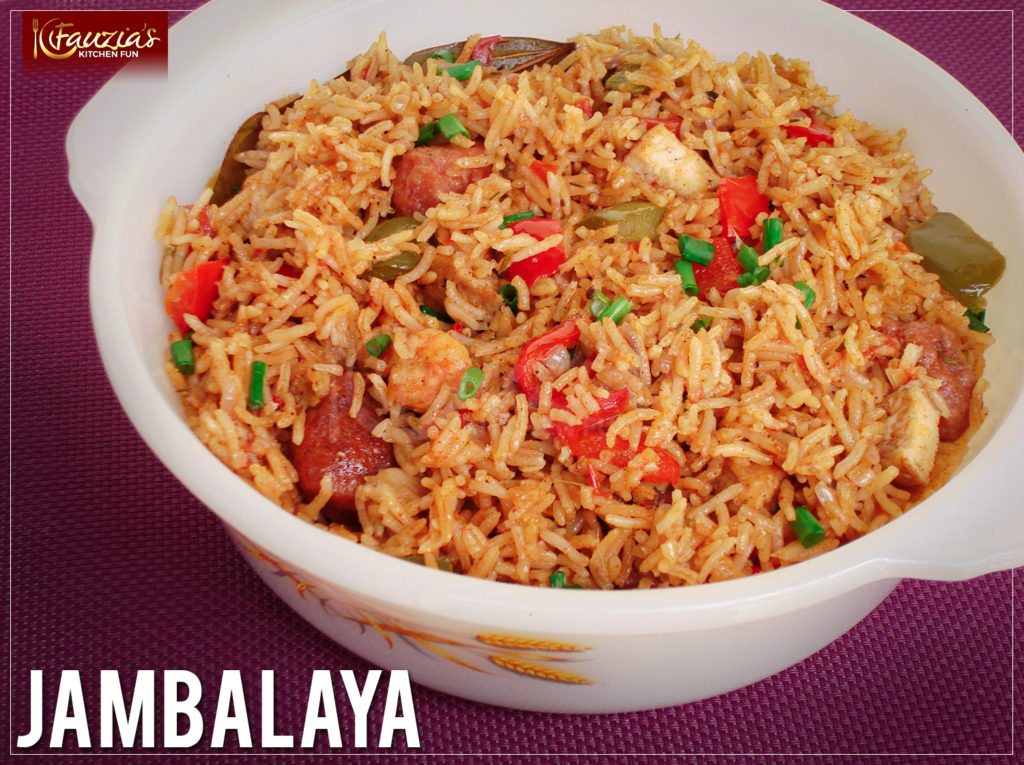 Jambalaya is a Creole dish inspired by both French and Spanish cuisine. This exotic meal originated from the Caribbean Islands and resembles the saffron Paella found in Spanish cuisine. The dish consists of meat, vegetables, stock and rice, making it an all-in-one colourful, spicy and complete meal. I make this with a combination of three meats (chicken, prawns/shrimp and sausages), but it can be re-adapted and cooked using only one or two of those meats depending on personal preferences. What makes this dish especially awesome is that it is incredibly easy to put together once you have all the components on hand.

First prepare the Cajun Seasoning by mixing all the cajun seasoning ingredients together. The recipe makes about 4 tbsp of seasoning. For the jambalaya recipe you will need 2 tbsp. Save the rest for the next time you make jambalaya or for my Cajun Chicken Steak (recipe HERE).

Next, put the sliced sausages, the prawns and the chicken cubes in a bowl. Sprinkle 2 tsp of cajun seasoning over them. Mix and let them sit for about 10 minutes to absorb the flavour.

Then heat 2 tbsp oil in a large pan and cook the three meats together for about 2-3 minutes on high heat, just to colour them slightly. They do not need to be cooked fully as they will later beadded in the rice and therefore they will cook a bit more at that time, so just brown the outsides slightly, then put them in a bowl, cover and set aside.

Add the remaining oil in the same pan, heat it up and then add the onion, bell pepper and celery. Fry until they just begin to turn golden. Add the garlic, tomatoes, bay leaves, worcestershire sauce, hot sauce and 2 tsp of cajun seasoning. Cook this down until the tomatoes are mushy, then add the broth.

Bring it to a simmer and add the rice. Give it a taste and see if it needs some extra salt. Simmer on medium while covered, giving a stir occasionally until most of the broth has been absorbed into the rice, then add the meats and stir them in. Taste and adjust the seaoning, then turn the heat down to very low and cover with a tight lid. Allow the rice to steam for about 10-15 minutes before opening. Fluff up the rice and serve with a final sprinkle of cajun seasoning and some chopped green onions.