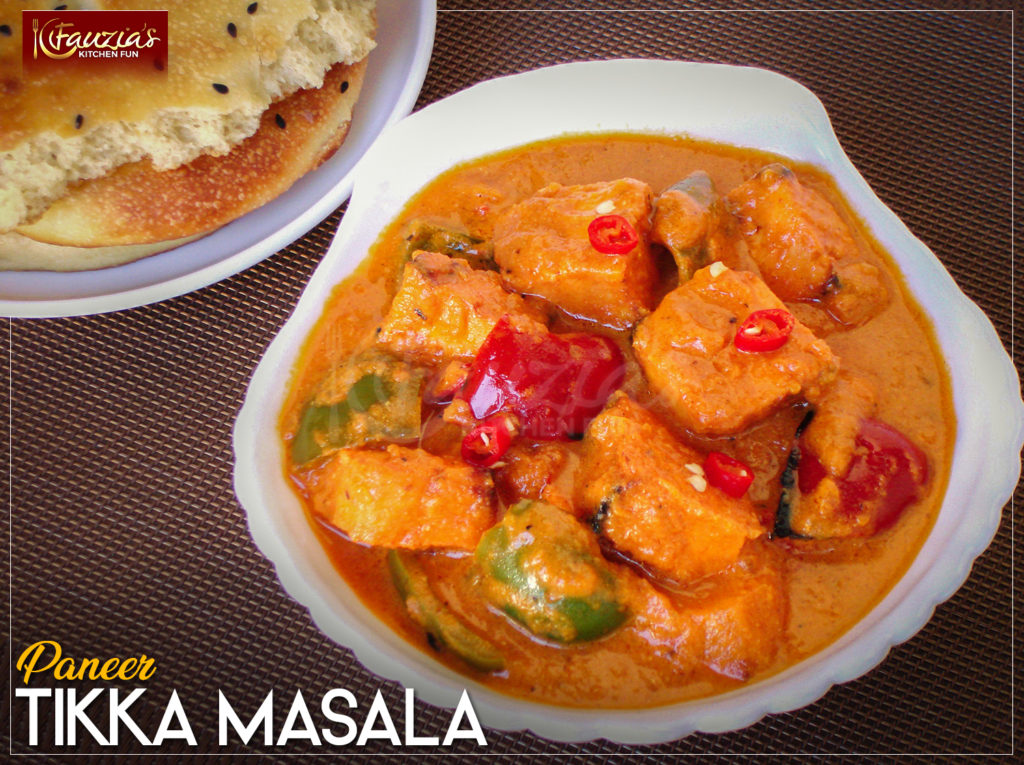 Paneera tikka masala is an Indian dish made from cubes of paneer (cottage cheese) marinated in spices, grilled with capsicum and onions and then added into a delicious spicy gravy or masala.

First, prepare the paneer tikka. Put the yoghurt in a clean cloth and hang it for 30 minutes to an hour so that any excess water drips out and it gets thick and creamy.

Then, in a bowl, mix together the thick yoghurt, powdered spices, ginger, garlic, lemon and oil. Stir well until combined. Now add the cubed paneer, capsicum and onion.  Mix gently so that everything is well combined.

If your paneer is crumbly, mix it in half the marinade separately and mix the veggies in a different bowl with the remaining marinade to avoid the paneer from falling apart during mixing.

Cover and refrigerate for at least 2 hours, or overnight if possible. This will ensure that the flavours seep into the paneer giving you tastier results.

Before you are ready to grill the paneer, if you are using wooden skewers, soak them in water for about 30 minutes. This will prevent them from burning.

Skewer the paneer cubes alternating with the coloured capsicum and onion. Grill on a bbq grill for a total of around 15 minutes, turning them occasionally for even grilling. You can even bake these in the oven, preheat to 200C and place the skewers on a greased tray. Bake for aoubt 8-10 minutes per side. Brush the skewers lightly with oil OR melted butter midway during baking/grilling to prevent the paneer from hardening. Or you could just fry them in a lightly oiled pan on the stove top.

Once done, set aside and proceed with making the masala or gravy.

Heat the butter and oil in a pan, add the cumin seeds, cardamom and cinnamon. When the cumin starts to splutter, add the fenugreek leaves followed by the onions and fry until they are translucent and starting to brown. Then add the ginger and garlic pastes and the green chillies, fry them for a minute and then add the cubed tomatoes and the tomato paste plus the tandoori masala, turmeric powder, chilli powder, coriander powder and cumin powder.

Cook on high heat for a few minutes, then lower to a simmer and cook until the tomatoes are mushy, fragrant and well cooked and some oil begins to get released from the sides. Turn off the heat, and remove the cinnamon stick and the cardamom pods from the mixture. Let it cool slightly, then put the mixture in a blender and blend until smooth. Return the mixture into your pot, season with a bit of salt and the sugar. You can add a tiny bit of warm water at this stage if you want extra gravy. Bear in mind that the gravy will thicken slightly once the cream goes into it.

Remove the grilled paneer cubes and veggies from the skewers and add them into the gravy. Mix well then add the cream and garam masala and simmer together for about 3 minutes until the gravy thickens and coats everything well. Adjust seasoning. Switch off and garnish with chopped coriander or chopped chillies. Serve over rice or with naan.