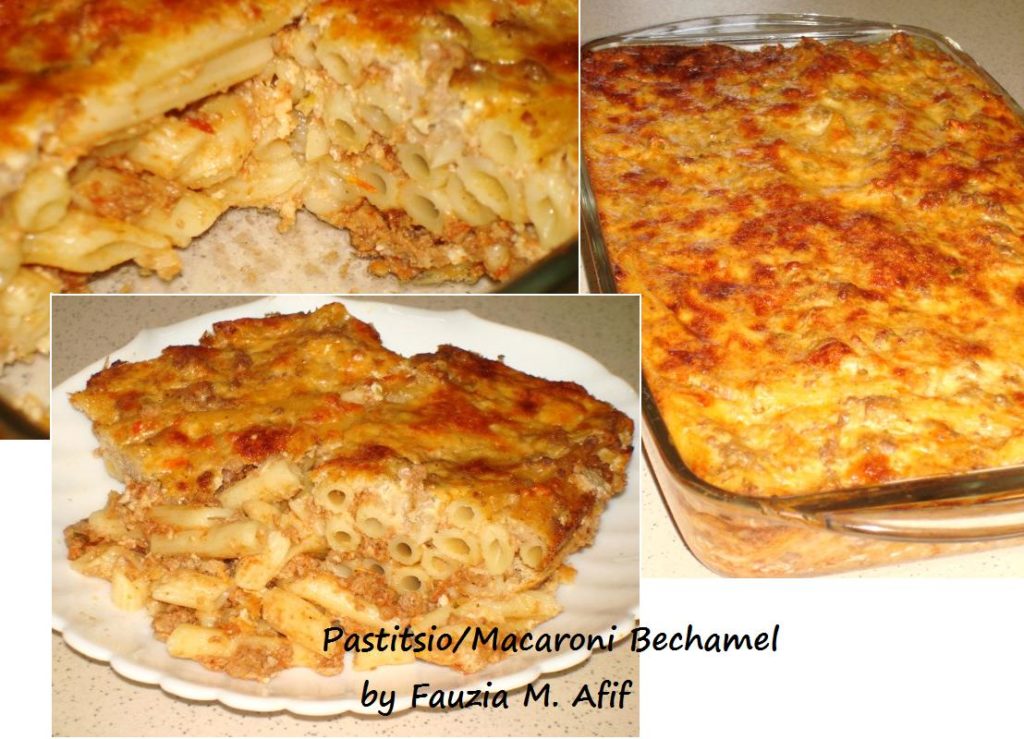 Pastitsio is a fantastic and delicious Greek/Mediterranean baked pasta dish which includes a meat sauce and béchamel sauce. It is a version of the Italian dish pasticcio di pasta, also known as lasagne al forno.

The Egyptian name for this dish is Macaroni Bechamel.

Ingredients for the Béchamel Sauce

Heat the oil in a pan, then add the onions and fry until transparent, then add the ginger and garlic paste and salt. Stir fry for a couple of minutes, then add the beef mince and cook on medium heat until all the water evaporates. Sprinkle the black pepper, turmeric, cumin powder, cinnamon, bay leaf and oregano. Once the mince is completely dry and begins sticking to the bottom of the pan, pour in the broth or water to de-glaze the pan. Now blend the tomatoes with the green chilies and add it in the mince, along with the tomato paste. Sprinkle the sugar, mix then cover and reduce heat to low, let it simmer for about half an hour.

In the meantime, boil the pasta as per the packet directions. Make sure you don’t over-cook the pasta as they will bake later, so cook them about three-quarter done (add salt and oil to the boiling water). Drain and set aside.

Check on the sauce, if it has thickened, adjust seasoning and turn off the heat. You can add water if it needs it. It should be on the thick-gravy side. Once ready, turn off the heat, then remove quarter cup of the mince and set it aside to be used in the béchamel later.

Pour the cooked pasta into the meat sauce and gently stir until combined, taking care not to break the pasta. Grease an 11×7″ pan with some butter and pour the pasta n meat sauce into it. Preheat the oven at 180 C.

Then you can prepare the béchamel sauce

Heat butter in a pan till melted sprinkle the flour and stir together for about 2 minutes. Then remove from the heat and gradually add the milk a little at a time while whisking continuously. Once all the milk is in, put the pan back on the heat and keep whisking on medium to low heat until the sauce thickens, about 5 minutes. Then remove from the heat and add salt, pepper and nutmeg. Add the cheese and mix it in. Then add the lightly beaten egg and IMMEDIATELY whisk very quickly to combine, remember the béchamel will still be hot so if you are slow the egg will cook and remain chunky, you want it to blend in well in the sauce. Once it has combined well into the sauce, add the yoghurt and the reserved quarter cup of meat sauce. Mix everything well and then pour the sauce over the pasta/meat sauce in the dish. You can sprinkle some extra cheese on top if you want. Now bake in the pre-heated 180 C oven for about 40 minutes or until golden.

When ready, let the dish sit for about half an hour so the cheese sets before serving.