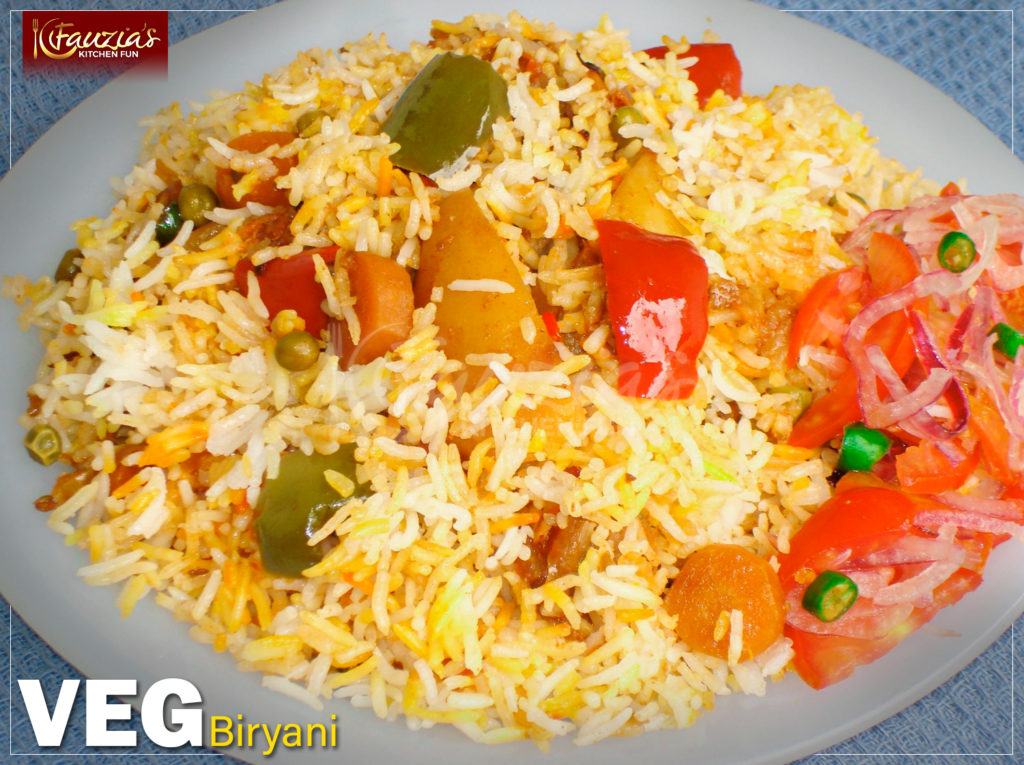 Occasionally, we love a change from our normal meaty biryanis, and with THIS vegetable biryani, you just may not miss the meat at all!! It’s delicious and spicy and light (for a biryani, that is). I normally use whatever veggies I have on hand, or pick those preferred by my family.

For this version I have used peas, potatoes, carrots and capsicum. You can also include cauliflower, beans, paneer, whatever you like. 🙂

Heat the oil in a deep pot then add the whole spices (cumin seeds, cinnamon, cardamom and cloves). Once the cumin splutters, add the fresh tomatoes and half of the green chilli. Cook until the tomatoes are dry, and then add half of the remaining fried onions (reserve a handful for later). Add the garlic and ginger pastes, followed by the tomato paste. Sprinkle salt, cumin, chilli, turmeric and coriander powders and a pinch of saffron if you’re using it. Cook together until the oil is released from the sides. Then add the whipped yoghurt and cook until the gravy is thick and cooked through.

Next, add all the veggies EXCEPT the fried potato wedges as these are already fried and fully done. Stir-fry into the gravy for a couple of minutes until they are all nicely coated. Add half cup water. Cover and simmer on low heat to cook the veggies through. Every once in a while, open the pot and gently mix everything well. The veggies shouldn’t take long to cook.

Once the veggies are done (I prefer to leave my capsicum with a slight crunch to them, so don’t cook the veggies until completely limp), adjust salt, add the remaining chopped green chilli, garam masala and chopped coriander. Add the fried potatoes and stir them in so they are coated properly with the gravy. Squeeze the lemon juice and stir, and then turn off the heat.

If you like your biryani masala with a bit of extra gravy, you can add a little extra amount of hot water and mix it in gently.

Next, prepare the rice.

Put half the rice back into the pan, add the veggie masala on top of it, sprinkle the handful of reserved fried onions and some chopped fresh coriander, and add the remainder of the rice to cover the masala. Then drizzle about 2 tbsp. of oil and the saffron water. Add a bit of orange colour on one side and mix it up a bit with a spoon and cover the pot tightly. Steam this on low heat for 15 minutes or put in a 180 C preheated oven for about the same time. Serve hot!