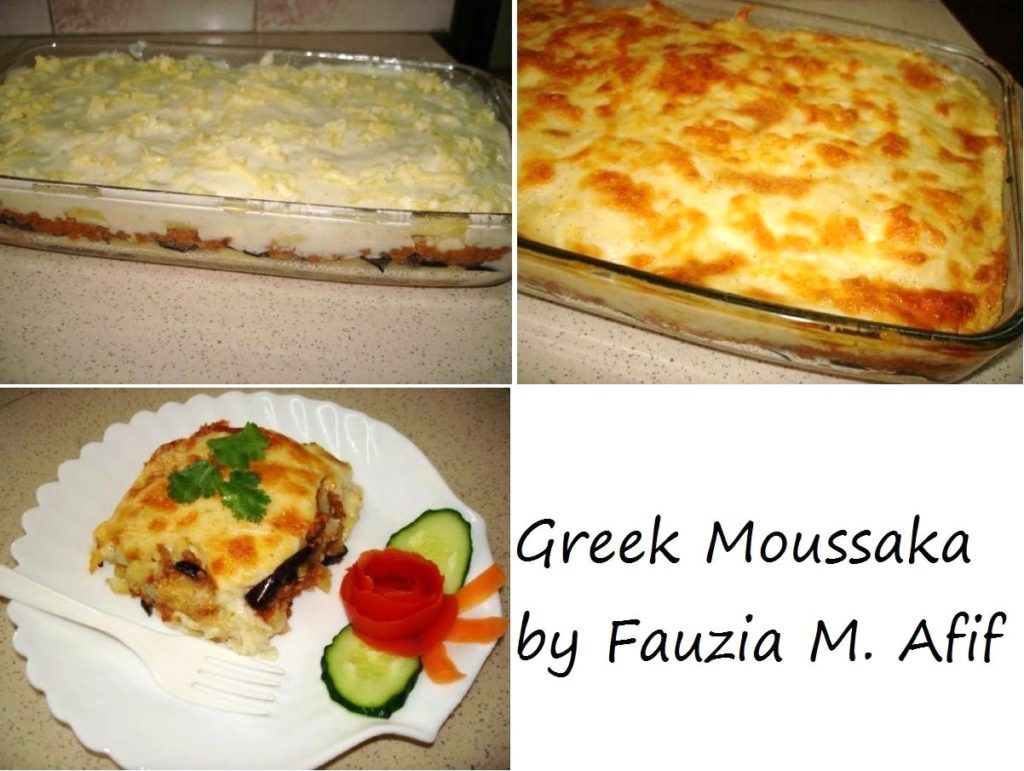 A Greek speciality, this luxurious casserole is made up of layers of sliced potatoes, eggplant, mince sauce, white sauce and cheese.

Melt butter in a saucepan, stir in plain flour, then cook on low heat for 5 minutes. Cooking the flour in the butter helps reduce the 'raw' smell of the flour so don't skip this step! Slowly whisk in milk, if you pour the milk in too quickly you will form lumps, so add gradually whilst whisking briskly to get rid of any lumps and form a smooth roux/mixture. Then bring to the boil, whilst stirring. Turn down heat, then cook until the sauce starts to thicken and coats the back of a wooden spoon. Set the sauce aside, making sure to give it an occasional stir to prevent it from forming a skin on the top.

Next, prepare the rest of the components.

In a frying pan, heat the oil and fry the eggplant slices on both sides. Drain on kitchen towels to get rid of excess oil.

Put the mince in a pan, add half tsp each of salt, pepper, ginger, garlic, cumin powder, coriander powder turmeric and garam masala. Add one chopped green chilli, some lemon juice and some chopped coriander. Turn on the heat and cook, stirring often and breaking any lumps that form until the mince is completely dry and turns brown. Turn it out into a bowl and set aside. Give the pan a wipe and place it back on the heat. Add 2 tbsp oil and then add the onions and saute them until they are soft. Add tomatoes, remaining spices, garlic, salt, black pepper, cinnamon, thyme, rosemary and chopped coriander. Cook them until the tomatoes are mushy then add 1 cup water. Cook for 5 minutes stirring occasionally. Then add the dried mince, give it a mix and simmer on low heat for approx. 15 mins or until sauce thickens. Taste and adjust salt/spice and you can squeeze in a bit of lemon juice if you like.

When it is done, grease an oven proof dish. Line the base of it with the boiled potato slices, followed by the egg plant slices, then a layer of mince sauce and finally the white sauce.

Sprinkle the grated cheese on top and bake in a 180 C oven for half an hour or until the cheese is golden and bubbly. Garnish with parsley and serve!