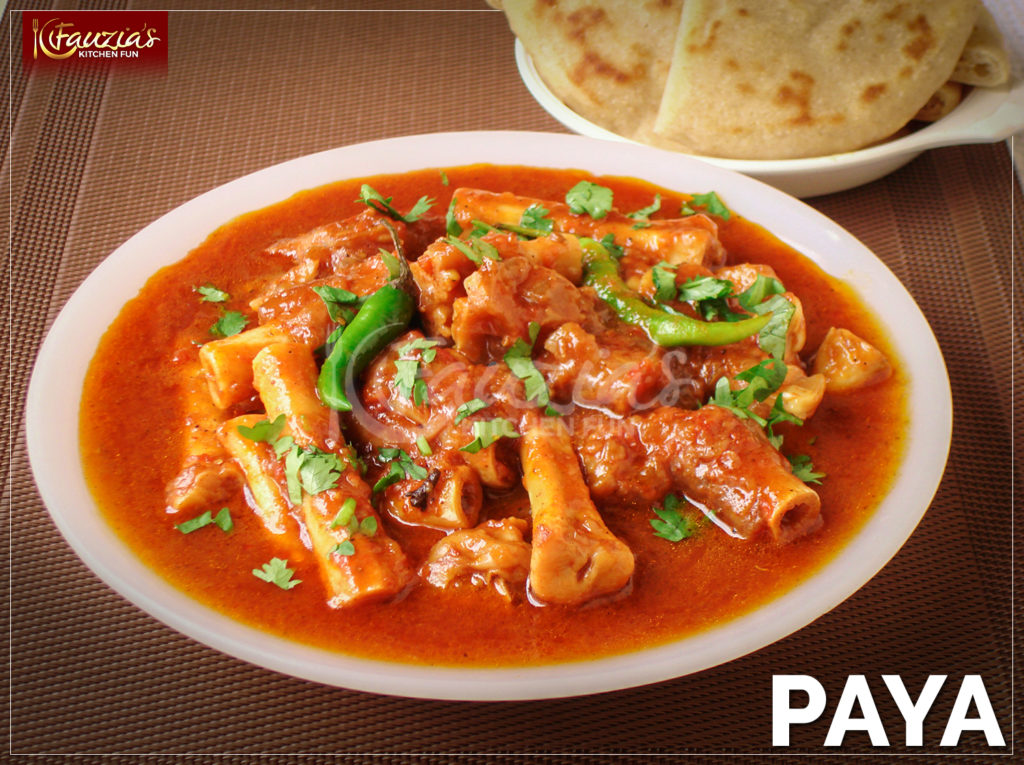 Paya is a traditional Pakistani breakfast dish. It is made using trotters and served with naan or sometimes rice. If done correctly, paya can make for one of the most finger licking and satisfying dishes imaginable!

If you plan on using the optional nihari spice powder, HERE is my recipe for it.

Clean and was the trotters thoroughly, then set them to drain.

First we will need to boil the paya/trotters. Have all the listed boiling ingredients ready. Heat 1 tbsp oil in a pressure cooker, then add the chopped onion, ginger and garlic pastes and bay leaf. Stir until the onions soften and the mixture is aromatic. Add the trotters, and sprinkle the salt, black pepper, nihari powder and onion paste. Fry them while mixing regularly for 2 minutes. Then add the water and bring to a simmer. Skim off any foam that rises to the top. Close the pressure cooker and allow them to cook for about 45 mins to an hour.

If you do not have a pressure cooker, simply use a regular pan and boil until the trotters meat is tender and almost falling off the bone. You will need to use more water, so just keep topping them with water as needed while they boil. They will take about 2 hours to so to cook in a regular pan.

While the paya are boiling, get yoru second batch of (paya masala) ingredients ready. When the paya are ready, turn them with their remaining water into a bowl, clean out the pressure cooker and put it back on the heat.

Add the oil, followed by cinnamon, cloves, cardamom, black pepper and cumin seeds. Then add the chopped onions. Fry until they are golden brown. Add the ginger and garlic pastes and stir them in. Then add the tomato paste, followed by the blended tomatoes and yoghurt. Sprinkle all the powdered spices EXCEPT the garam masala which we will add later on. Cook until the masala thickens and oil begins to get released from the sides. Then pour in the cooked trotters along with their broth. If more water is required, you can add some. Bring to a boil, then close the pressure cooker and allow them to cook again for about 10-15 minutes. This will help incorporate the masala ingredients into the paya.

Release the steam from the cooker, then carefully open it and sprinkle the garam masala. Stir it in and taste/adjust for salt. Just before serving, sprinkle some chopped coriander.

Serve with warm naans or rice.