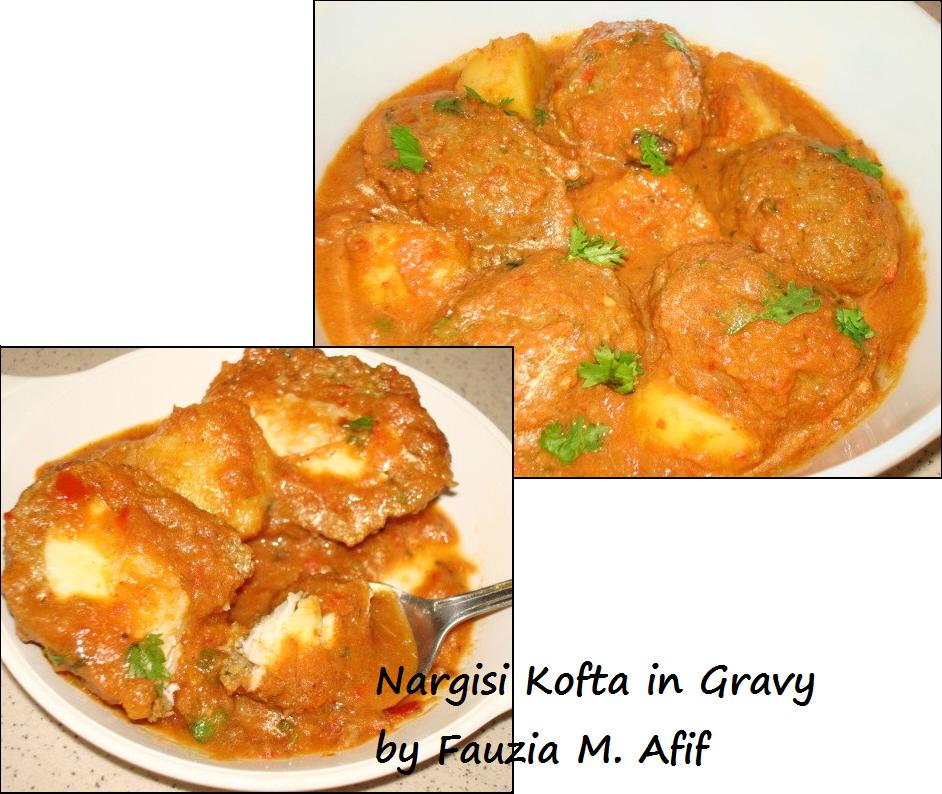 Luxurious spicy kababs each of which encloses a boiled egg within the meaty kabab…a spicier version of Scotch Eggs. The delicious kababs are then dipped into a tomato gravy and simmered together to infuse flavours all through.

Put the garlic, ginger, chillies, coriander and lemon from the Kofta ingredients in a processor and grind them to a paste. Then add 400gm lean beef mince (no fat) and process again until everything is well combined and smooth. Turn the mixture out into a bowl then add the salt, black pepper powder, breadcrumbs, turmeric and cumin powder and mix again until thoroughly combined. Refrigerate for at least half an hour.

Make sure the mince has very little or no fat content in it. The reason is, once the koftas are formed, they need to be fried for a few seconds. If the mince has any fat in it, the fatty parts will dissolve in the hot oil and that will form cracks on the koftas, thereby making the meat fall off the egg as they continue to fry.

In the meantime, boil 3 eggs, then peel and slice each one in half. I prefer using half a boiled egg in every kofta, but if you want a full egg then just boil more eggs and keep them for the next step. 🙂

Remove the blended mince from the fridge and take a handful at a time, then shape it around the half boiled egg. Make sure the egg is fully covered and there are no cracks anywhere. Any cracks will result in the meat falling apart when you fry the koftas.

Once all are done, put them on a plate and cover, then refrigerate for at least another half an hour. I find by refrigerating them, it helps make sure they stay intact during frying.

Heat enough oil in a pan to fully immerse the eggs in. Once very hot, lower each kofta into the oil with the aid of a slotted spoon, and fry for no more than half a minute. This is ONLY to make sure the koftas maintain their shape and stay solid, they will get cooked further in the tomato gravy which comes in the next step. Drain the excess oil from the fried koftas on kitchen tissues.

Heat the oil, sauté the onions until nice and golden, add the ginger+garlic paste, followed by the tomato paste. Stir and add the spices, yoghurt and green chillies. Cook until the oil begins to get released from the sides then add the blended tomatoes (I blend them with 2-3 green chilies and some coriander stems) and the sugar+salt. Cook the sauce until it thickens, adding a bit of water when it gets too thick. Once ready, taste and adjust salt.

Now add in the fried koftas that you have set aside, slowly one at a time. Once all are in, lower the heat and let them simmer gently for about 15-20 minutes. To turn them over, use a spoon and flip them gently, or swirl the sauce around by lifting the pot and swirling it gently.

Adjust salt/chilli. Garnish with chopped coriander and you can squeeze a bit of lemon if you like and a light sprinkle of garam masala, and serve with naans/parathas/rice…whatever you like.

I like to add cubed boiled potatoes in the gravy, that is entirely optional and can be left out if you want.