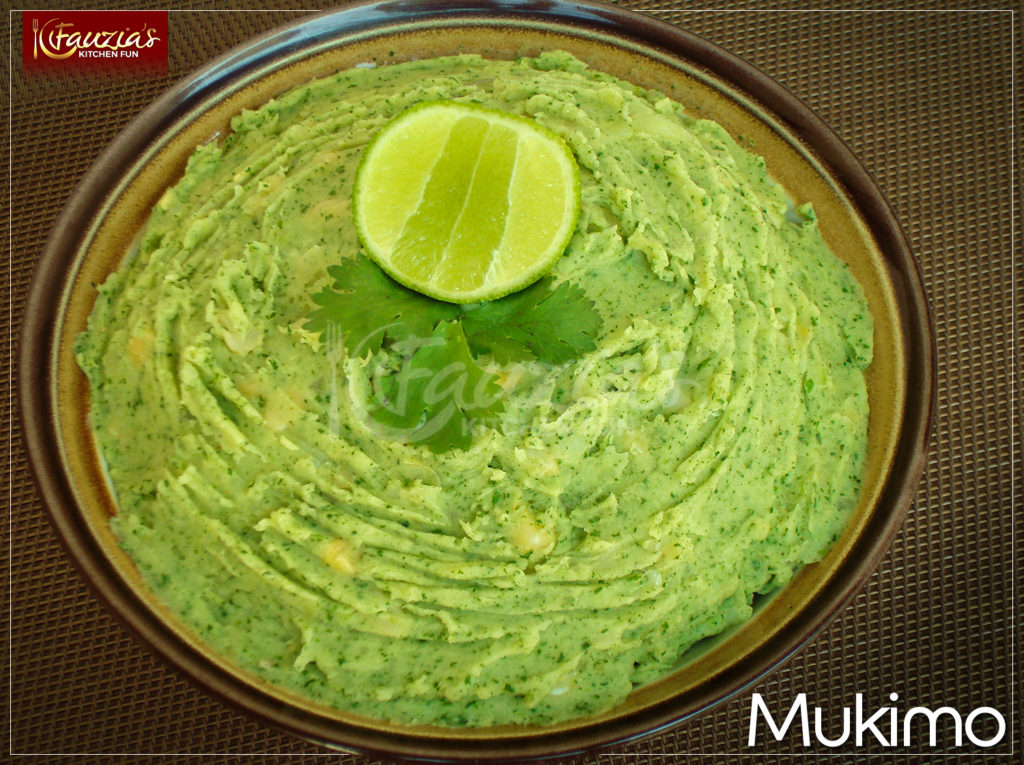 Mukimo is a Kenyan mashed potato dish that incorporates various other ingredients to your ordinary mash, elevating it both in flavour and nutrition and giving it its signatory vivid green colour. There are very many versions of this dish. Traditionally, the more common ingredients used are potatoes, maize/corn and some green vegetables like peas or spinach. It is then served as a side to a meaty stew. Here is my interpretation of this awesome dish. It is an absolute MUST TRY!

Start off by boiling the maize/corn until these are tender and measure out one cup.  For ease, you could also use canned sweetcorn, in which case you will not need to boil them. Simply drain from can and measure out a cup.

Now heat the oil in a pan, add the chopped onion and stir it in until softened. Then add the garlic and green chilli.  Next add the boiled maize/corn and season with a little bit of salt. Pour this mixutre in a big bowl, cover and set aside. You will later add potatoes to this bowl so make sure it is big enough to hold everything.

Peel and cube the potatoes, wash them and then boil until tender.

While the potatoes are boiling, take another pan and bring a small amount of water to the boil, add a pinch or two of salt.  Add the spinach into this boiling water and just blanch them for about 2-3 minutes, then drain and blend this until completely smooth. Set aside.

Once the potatoes are completely tender, drain them and add them to the large bowl that is holding the onion and maize/corn mixture.  While the potatoes are still hot, add the butter and milk and begin mashing everything together while gradually adding the spinach mixture.  Keep going until the mash is smooth and the colour is vivid green.  Squeeze the lemon juice, then taste and adjust seasoning if need be.

Serve with a stew of your choice.