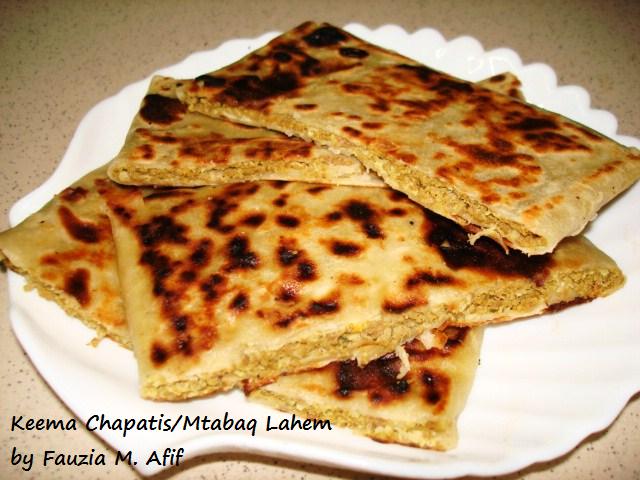 At home we normally call these Keema chapatis! Basically you beat an egg into some pre-dried spicy mince meat, and then you sandwich the mixture in a thin chapati and then cook this gently over a flame exactly as you would rotis/chapatis. Really filling stuff and goes oh so well with spicy tamarind sauce and a salad!

Mix the flour and salt, then knead with the water into a hard dough. We don't put oil in this dough….try and knead it as much as possible, but make sure it's a harder dough than the usual soft dough which you would do for buns.

Leave the dough covered for about 15 minutes, then make 6 equal sized balls.

Roll each ball out thin, to the size of a dinner-plate. Once all are rolled out, place the first circle, apply oil on the top side very thoroughly (make sure the oiling is done evenly) then sprinkle some flour. Take the 2nd circle, apply oil on both sides of it and pile it on the first circle. Again sprinkle flour. Keep going like this until you have piled all 6 circles one on top of the other making sure you don't forget to oil and flour in between (to help separate them later).

Once all are done, roll out this pile to a slightly bigger size making sure it is as even in thickness as possible.

Heat a large flat roti tava (or even a flat cooking pan's cover if you don't have a big enough pan). Make sure the heat is on very very low. Place your rolled out pile on the tava and keep turning it and moving it around n turning it over fairly often so that it doesn’t over-cook. If it over-cooks the layers wont separate later. You can keep switching off the stove every so often so that the heat is not too much.

Once you find the topmost layers slightly done with tiny bubbles n very light brown patches, peel them out gently n carefully, then lay them aside on a soft cloth. Continue heating the pile and keep peeling off the layers one by one until all the wraps are done and separated from the pile.

Now, to make the chapatis, you will need the above wraps, samosas keema, an egg for each chapati and some flour mixed with water for the sealing.

HERE is my Keema Recipe.

Cut out the rounded edges to form a square shape. Put your keema (about half a small bowl) beaten with an egg mixture in the center shaping it in a smaller square inside the wrap and fold over it so that the mixture is enclosed, sealing the overlaps using the flour and water mixture (like you would do for wrapping samosas).

Cook these keema chapatis on a tava over low heat, applying a bit of oil now and then and turning them regularly. Serve with a salad!