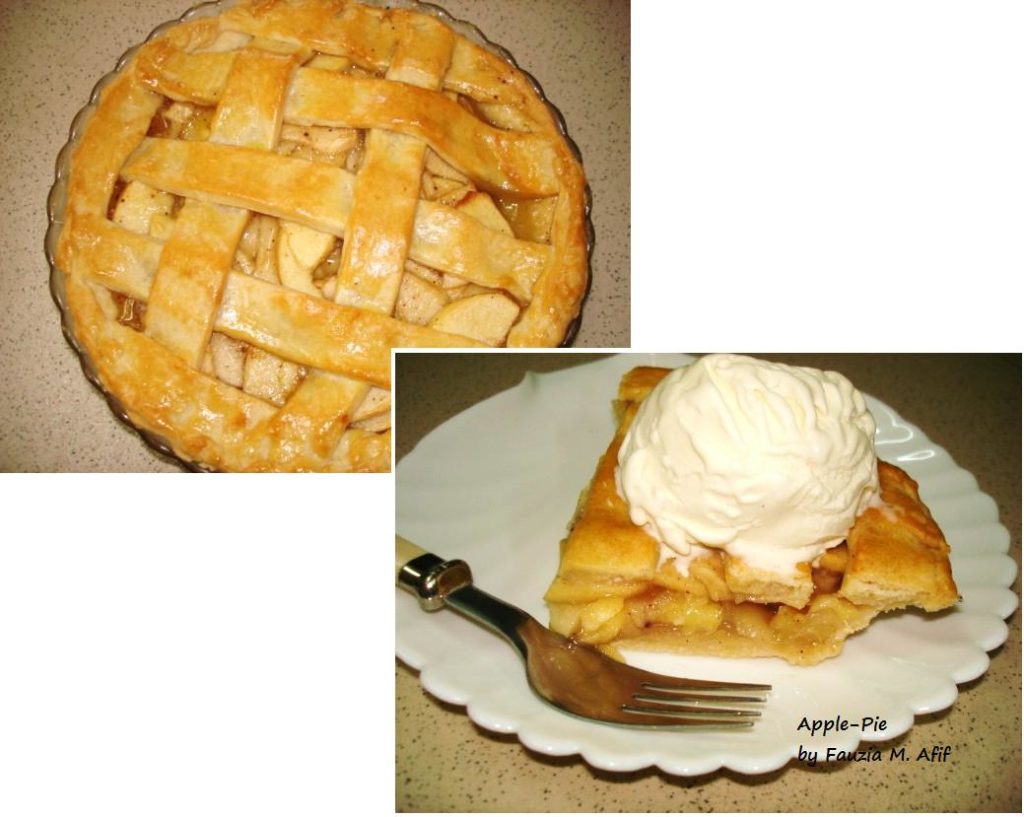 Mix all the dry ingredients into a bowl and put the bowl into the freezer for about half an hour. The colder the crust ingredients, the flakier the crust will be. Cut the butter into small pieces and put back in the fridge to get them as cold as possible as well.

Add the butter into the flour and rub in quickly using fingertips or a dough blender if you have one. Don’t over-mix. Once flakey and crumbly, add the very ice-cold water a little at a time and knead together. But don’t over-work the dough, the less you handle it the better the results. The dough should be firm, not sticky. If it gets too sticky you can add a bit of flour.

Divide the dough into two halves, wrap each half separately in cling film and refrigerate for about half an hour. In the meantime you can start preparing your filling.

For the Pie Filling

Peel and slice apples, then soak them in a bowl full of water that has been mixed with the lemon juice. This preserves the apples color.

Drain the apple slices from the lemon water and add them to the mixture, stirring well to make sure they are fully coated.

Method of preparing the pie.

Remove the first crust dough ball from the fridge and roll it out to about an eighth of an inch thickness.

Wrap it around your rolling pan, lift gently and unroll it in your pie pan. Once shaped to fit the inside of your pan, dump in the filling and place about 4 small chunks of butter on top of the filling to give the pie a rich flavor.

Remove second dough ball from fridge and roll it out. Cover the pie and shape the edge with fingers or knife. Make slits to let the steam out during baking. If you prefer a lattice finish like the one I’ve used in mine, cut the 2nd rolled out dough ball into strips and create a patterns then pinch the edges together.

Cut long strips of tinfoil and place around the edge of the pie to prevent it from burning during baking. You will remove the foil about 10mins before the pie is done.

Bake at 175 degrees C for about 40 mins first. Remove the pie and uncover the foil, brush with egg yolk and put it back in the oven without the foil for another 10mins or so until the color is golden brown.

Don’t be tempted to cut into your pie immediately. Normally the filling will be a bit wet, and has to be given at least 2 hours to set before serving. Just keep the pie in its pan for as long as you can before slicing. Tastes best with vanilla ice-cream.