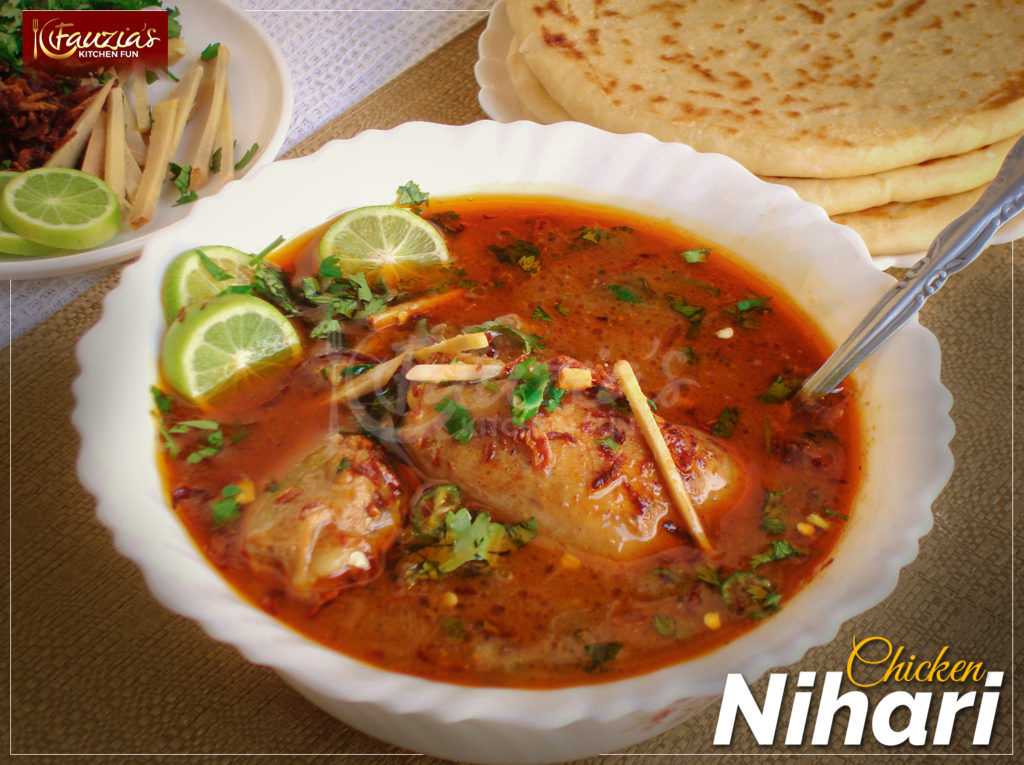 Nihari is a Pakistani/Indian/Bangladeshi dish, a fiery spicy stew consisting of slow cooked mutton/beef or chicken. The word Nihari originates from the Arabic word ‘Nahaar’ which means early morning.  It is so named because Nihari was originally enjoyed in the early morning, right after fajr prayers.

This can be done up to2 months in advance and stored in an airtight container and used gradually as needed.  The recipe makes 4 tbsp. of spice powder.

Put the first 11 from the spice ingredients onto a non-stick pan and roast for a few minutes over a low flame until the spices are fragrant.  Do not let them colour or burn.  Grind them into a fine powder.  Then add the remaining 5 ingredients from the same list and mix everything well.
Next, you can begin to prepare the Nihari Chicken

Heat your oil in a deep pan (preferably non-stick), then add the onions and fry until lightly golden.  Addd the ginger and garlic pastes and stir until aromatic.  Next, add the chicken and stir-fry on medium high heat for about 10 minutes.  Sprinkle the Nihari powder and stir well.  Next, add the water and salt, give everything a stir and lower the heat.  Cover the pot and allow to cook on VERY LOW gentle heat for an hour.

Whilst the chicken is cooking, warm up and lightly brown the atta flour on a small non-stick saucepan over low heat.  This is to get rid of any raw smell from the flour and enhance the flavour.  Allow the flour to cool in a bowl then add some water gradually whilst mixing to form a light paste with no lumps.

You can use 2-3 tbsp. cornflour in place of the wheat/atta flour, just mix it with some water and we are done.  This makes the process easier, however using roasted wheat flour is the more authentic way of making this traditional dish.

Turn up the heat and slowly add the whole wheat flour (or cornflour) paste into the pan whilst stirring continuously.  This will thicken the gravy.  Once all the paste is mixed in, give everything a final stir, taste for salt and adjust if needed.  Then lower the heat again to very low, cover with a tight lid to seal the pan completely.  Keep the heat low, remember, the trick is to cook Nihari on low heat to get the meat perfectly tenderised and for the oil to rise to the top of the dish.  Give the chicken another 30 minutes to cook on very low flame then turn off the heat and let the pan stand with the lid still closed for another 10 minutes.

If you want, just before serving you can make a tarka (which means tempering oil with a bit of spice) which can be poured onto the dish right before serving it).  Simply heat 2 tbsp. oil, turn off the heat and sprinkle 2 pinches each of garam masala and nihari masala.  Then immediately pour this onto the Nihari dish and do not stir it too much.  This tarka/tempering process enhances the flavour of the Nihari and further spices up the fiery dish.

Serve with garnishings of your choice and some warm naans.