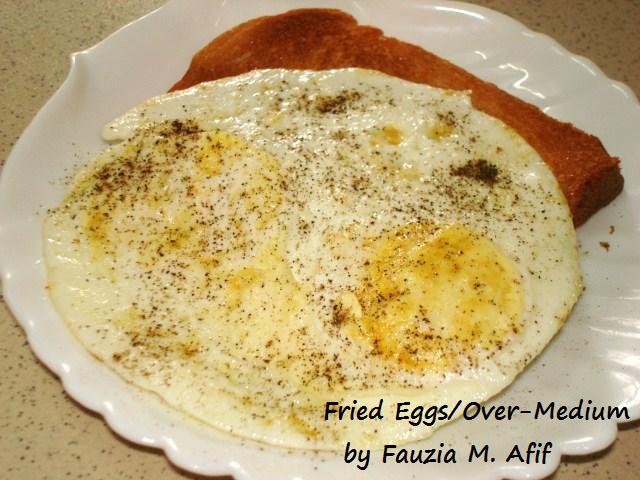 Just about everyone can make Fried Eggs, but I know when one is starting out in the cooking field, something that most of us take for granted is actually quite a menacing task! I remember a time when every fried egg I made looked like something that has been through a war and barely survived lol.

So here’s how you can make perfect fried eggs.

Everyone has their preference. Some like them sunny side up, whereby the egg is not flipped, so the egg is cooked until the white is fully set but the yolk remains bright and runny. Some like them over-easy, whereby the egg is flipped during cooking but the other side is not cooked for too long so the yolk stays runny. Some (like me) prefer eggs over-medium, whereby the egg is flipped and the second side is cooked just enough for the yolk to set softly…so there is no runny stuff on my breakfast plate lol. There are others who like the eggs over-hard…this is when the eggs are flipped then cooked until the yolk is completely solid. The difference in time between each stage is half a minute more or less.

Heat the butter or oil in a small non-stick frying pan on low heat. Once heated, break the egg in a bowl and slide it into the pan. Try getting the bowl edge as close to the pan as possible when pouring the egg to avoid the white from spreading out too much. Keep the heat on low so that the egg stays a nice clean color, unless you prefer crisp edges then you can increase the heat slightly. Add the second egg into the pan using the same method if you’re doing a double like the one in the pic.

Cook until the white is almost fully cooked and set. Sprinkle your seasoning, then (if you want the over-easy/medium/hard type) flip the egg and cook them on the other side. You will need to cook them on the other side for 30 seconds for over-easy, 1 minute for over-medium and a bit longer for over-hard. Once you flip the eggs, don’t be tempted to move them for at least 30 seconds otherwise the yolk will burst and run.

Serve with toast and lots of black pepper.