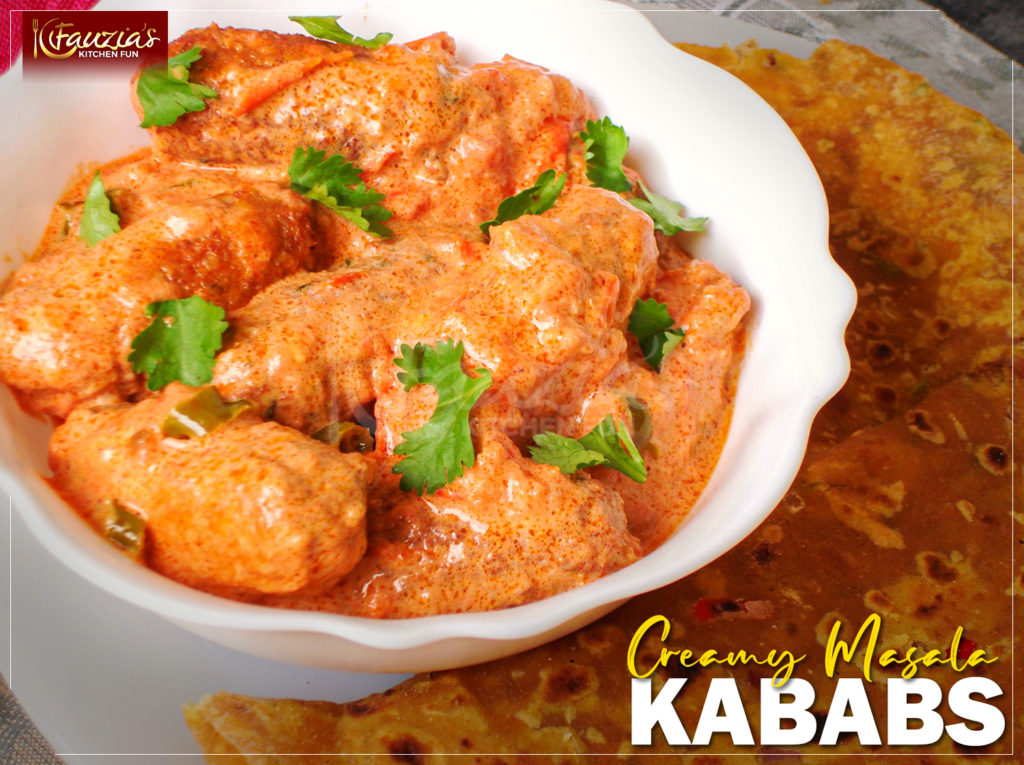 A slight twist to my yummy masala kababs, this version is richer from the addition of cream. The result makes for a delicious meal with naans, parathas or even over rice.

Turn it out into a bowl, add the cumin, turmeric, tandoori, black pepper and salt. Mix well. Squeeze out the milk from the soaked bread then add the bread into the mixture. Discard the milk. Add the egg. Knead the mixture properly for about 3-5 minutes until everything is very well combined. Cover the bowl with cling film and refrigerate for about 30 minutes.

Shape the meatballs (make sure they are very smooth and round or oblong) and then lightly shallow fry them in very little oil preferably in a non-stick pan, just for a couple of minutes on each side. Drain and set aside. They will cook further in the gravy/masala, so don’t over-cook them at this point. If they crack a little bit during frying, don’t panic, they will be covered in gravy later so the small imperfections won’t show, just be gentle when adding them to the hot oil and lifting them out.

Heat the oil in a deep pot. Add the methi leaves, followed by the cumin seeds, cinnamon and cardamon. Once they splutter, add the onions and fry until golden brown. Next add the fresh tomatoes and fry until they dry up and all excess moisture is gone. Add the garlic and ginger pastes, followed by the tomato paste. Sprinkle salt, cumin, chilli, turmeric and coriander powders.

Cook together until the oil is released from the sides. Then add the whipped yoghurt and cook until the gravy is thick and cooked through. Sprinkle the sugar and mix well.

Next, add some water (about half to one cup..just enough to immerse the kababs in). Once the water simmers, reduce the heat to low and then gently add the fried kababs. Cover and simmer on low heat to cook the kababs through. Every once in a while, open the pot and gently swirl everything together so that the gravy coats the kababs and they get turned over so that they may cook evenly on all sides.

If the kababs are cooked and you have too much gravy, gently remove the kababs with a slotted spoon and place them in a bowl. Simmer the gravy on its own until it reduces in volume to the consistency you like. Once ready, slip the kababs back in and give them a swirl. Done!

Once the kababs are fully cooked, add the cream and allow to simmer for 3-5 minutes. Adjust salt, add the chopped green chilli and garam masala, garnish with coriander and serve!